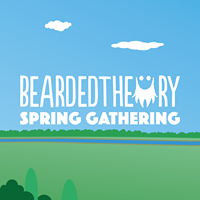 The festival with the beards, bands and DJs!

Bearded Theory is the Midlands largest performing and creative arts festival which is hosted within the iconic grounds of Catton Hall in Derbyshire.

Bearded Theory is an award winning event set in the beautiful grounds of Catton Hall in Derbyshire. Having been runner up in many categories over the years, 2013 saw the festival winning the "Best Small Festival" award at prestigious UK Festival Awards and winning the Festival Kidz Gold Award for our amazing children’s village. 2011 also saw the festival winning the “Best Independent Festival” award at the AIM Music Awards Ceremony.

It all started in 2007 as a birthday celebration in a field behind a pub in the Derbyshire Dales. Having moved sites several times in order to cope with the increasing amount of people who wanted to attend, Bearded Theory has settled at Catton Hall with a permanent license, with the picturesque backdrop of the Hall and woodland. We believe in keeping the festival small, non-corporate and friendly, whilst delivering a diverse range of quality entertainment at an affordable price.

Please be warned - tickets sell out each year.

So what about the acts….

With an audience from all walks of life, we like to keep the music line up as varied as possible.