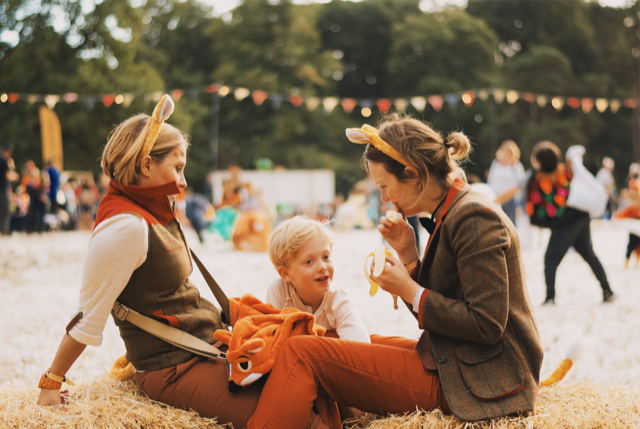 With just one month to go until Just So Festival celebrates its 10th birthday, festival directors Rowan Hoban and Sarah Bird share their top ten unmissable things in the line-up. From foot-stomping music to the Tribal Tournament, 2019 is set to be the ‘most spectacular Just So ever’ and organisers are expecting a sell-out.

Just So is a multi award-winning, imaginative outdoor family adventure like no other. With a love of stories and childhood escapades at its heart, Just So enables families to step out of their day-to-day lives and into a wonderland of world-class theatre, literature, dance, music, and comedy. It takes audiences on a unique expedition to lands full of magical midnight feasts, curious creatures, hidden retreats, top notch food and breathtaking beauty.

The Just So music line-up is guaranteed to get audiences dancing, including the strings, vocals and percussion of Mancunian quintet Kabantu, the high energy of Mr Tea and the Minions, and 13-piece Balkan-Gypsy-Latin ensemble The Destroyers. Just So regulars can look forward to festival favourites Zong Zing Allstars, the jolly Biscuithead & The Biscuit Badgers, The Baghdaddies’ Geordie-flavoured Caribbean grooves, and Thingumabob & The Thingumajigs’ blend of pop, funk, reggae and soul.

The Hallé Children’s Choir, made up of children from across Greater Manchester and beyond, also celebrate their 10th birthday this year with a performance of How the Leopard Got His Spots from Rudyard Kipling’s Just So Stories.

Two: Get tribal in The Tribal Tournament

The Tribal Tournament returns for the 10th time for the battle of the decade. Families dress up as different animal clans from foxes to lions and compete to win golden pebbles, culminating in the grand Parade and crowning of the Tribal Tournament champions on the Sunday evening.

This year families can prepare their costumes at the festival with Wintercroft, a family-run design company who help people make fantastical animal masks from sustainable materials. Wintercroft have created seven incredible masks for the Tribal Tournament, so get involved, build your favourite animal and represent your tribe.

Just So wouldn’t be the same without storytelling round the campfire. The incredible Ian Douglas is back and is joined by his yarn-spinning friends Dieter Wadeson and Gary Bridgens, telling tales from the lands of Just So and beyond.

Audiences can also enjoy talks from authors and illustrators in Wonderland, including one of the nation’s favourite illustrators Rob Flowers reading from his book Festival Folk. Jane Kerr discusses her novel The Great Animal Escapade, Dutch illustrator Margit van der Zwan shows the power of illustration with her beautiful book Gordon and The Flying Piano, and novelist Catherine O’Flynn(What Was Lost; Mr Lynch’s Holiday) also takes to the stage to read her first children’s book Lori and Max.


Four: Put on your dancing shoes

Pick up a headset and choose your channel in the Silent Disco with Our Kids Social, swing your partner round and round to the riotous madness of the Cut a Shine ceilidh, strut your stuff at the Retro Disco, or crack out your Lindy Hop at The Ragroof Tea Dance with music from the 1920s to the 1950s. You can also learn new dance skills in a host of workshops, from flatfooting to Bollywood and Bhangra.

Five: Light up the woods in the Lantern Parade

The Just So Lantern Parade is guaranteed to bring joyful tears to the eyes of everyone involved. Audiences can craft their own beautiful lanterns from willow and paper before being led through the trees by the brilliant Ghost Caribou by Thingamujig Theatre and band The Baghdaddies.

The finest Just So traditions revolve around food! Join masters of story, wit and song - Ian Douglas, Gary Bridgens and Dieter Wadeson for the Midnight Feast, or bring your best bakes to the Big 10th Bake Off to impress the judges. There will also be an array of incredible food vendors delivering delicious treats from pasta to paella, croquettes to corn on the cob.

Seven: Laugh your socks off

Just So are thrilled to welcome poet, comic, singer and ukulele player John Hegley to the Footlights stage. Hailed as ‘comedy’s poet laureate’ by The Independent, Hegley brings his unique material about dog hair, potatoes and handkerchiefs to this year’s festival. And festival funny man James Campbell is back for his ever popular stand-up comedy show for children over five.

Roll Up, Roll Up is Just So’s exuberant area for all things circus. In this most spectacular and flamboyant part of the festival, Just So will be celebrating some of their favourite female circus acts. Look out for breath-taking Strong Lady Betty Brawn and Hocus Pocus Theatre’s Clown About Town.

Audiences can enjoy a host of outdoor theatre. Mobile street theatre troupe The Wheelabouts present their show Boudicca, with the iconic woman warrior rampaging through the festival in a chariot led by a galloping mechanical horse. The Fabularium are back with The Hare and the Moon, a story from Far East Asia with new animal headpieces, puppets, music, and for the first time ever for The Fabularium – illuminations! Little pirates can join a scurvy crew for Absolute Opera’s Hurrah for the Pirate King, an opera and ballet show designed for children, and tiny tots and their grown-ups can enjoy an interactive musical adventure in Hurly Burly’sOver the Moon – a first opera for little people.

Dutch company Swoolish Garage take the joy of bathing to the next level in theatrical wellness experience Vespaqua, the world’s smallest bathhouse! Festival goers don swimsuits and are driven around the Just So site in bathtubs towed by a 1966 Vespa Ape.

Ten: Play in the Ministry of Games

Head to the Ministry of Games for the biggest ever pass the parcel, plus giant versions of some of our favourite board gamesincluding Guess Who, Ludo and Scrabble created by the Wild Rumpus team. While you’re there watch out for sheep on the loose… Sports Day meets Sheep Trials in Mufti Games’ new interactive show One Kid and their Dog, inspired by the much-loved TV show of the same(ish) name.

Powering Up The Site

And You Thought Brexit Was Over

MUSIC IS NOT ‘NOISE’

…….AND ANOTHER REPORT ON OUR INDUSTRY